San Diego, CA, August 06, 2019: TECHCET—the advisory services firm providing electronic materials information—announced that the global market for quartz equipment consumables used in semiconductor manufacturing is forecasted to drop only -3% this year to US$1.26 billion for fabricated parts and $425M for base materials. These moderate decline estimates are attributed to current long lead-times and lean parts inventories; both positive signs amidst the negative growth (<-15%) of the OEM equipment market expected for 2019. Despite this year's forecast, the 5-year compound annual growth rate (CAGR) for both base materials and fabricated parts is estimated to be approximately 5% over the period 2018-2023, as detailed in the latest Critical Materials Report™ (CMR) on Quartz Materials (see Figure) 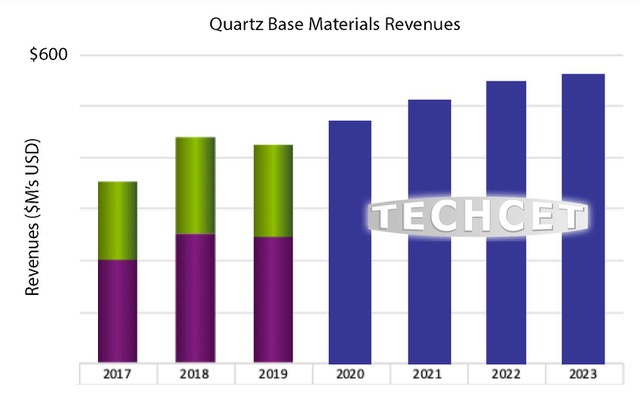 “A major 2019 theme in the quartz industry serving semiconductor manufacturers is consolidation through mergers and acquisitions,” explained Kuang-Han Ke, TECHCET senior technology analyst and author of the report. “Companies in this sector seek to become more vertically integrated up and down the supply-chain, with fabricators and base materials suppliers merging, and powder suppliers facing internal restructuring.”

Supply of 300mm quartz tubes for diffusion furnaces is limited in 2019 by the need for experienced workers, which faces a lag in development. Supply of machined parts can be increased more easily due to less need for skilled labor. Some portions of the market, especially DRAM and NAND memory fabs, will be affected more than others in 2019.