Passage of the bipartisan CHIPS and Science Act should alleviate semiconductor chip shortages that have increased prices and reduced supplies of cars, medical devices, and consumer electronics. But it would be premature to declare victory. Russia’s war on Ukraine has squeezed the market for rare gases like helium and neon that are vital to semiconductor production – highlighting our continued vulnerability in an unstable world.

The CHIPS and Science Act will bolster U.S. semiconductor research, development, and production, making critical investments in domestic production of the building blocks of all modern technology. But the legislation does not solve the quandary of sourcing rare earth materials and gases from China, Russia, and other geopolitical rivals. There is a vital need for more financial support for materials producers. Without it, building a semiconductor gases and chemicals plant in the United States will be prohibitively expensive for most chemical manufacturers – forcing us to continue to rely on imports from unstable regions. Additionally, the aftermath of COVID-19 will continue to increase production uncertainty and risk of logistics interruptions, putting U.S. supply-chain imports at further risk.

Figure 1. Currently, Helium is on Allocation to Chip Fabs because of Inadequate Supply;
by 2026 Helium Supply will Run 24% Short of Demand without Russia 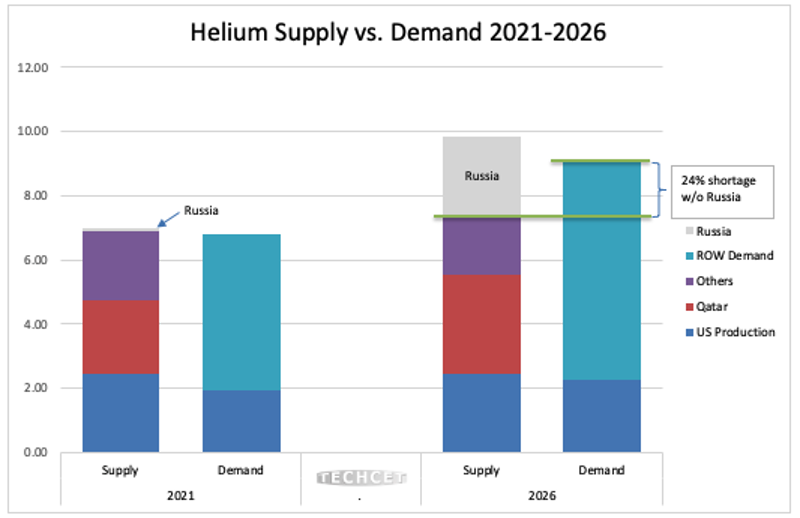 TECHCET and the Critical Materials Council have been actively tracing supply chain origins and disruptions emanating from Russia and elsewhere. The Russia-Ukraine disruptions are especially alarming since both countries are major global sources of semiconductor-grade rare gases. To put this into perspective, TECHCET estimates that 40-50% of the world’s semiconductor grade neon comes from Ukraine. Additionally, Russian state-owned Gazprom, one of the world’s largest natural gas and helium providers, ramped up production in response to global helium supply concerns following COVID-19. This put Russia on track to produce a third of the world’s helium. However, sanctions on Russia have made it much more difficult to obtain helium from Gazprom and other material suppliers.

Furthermore, the U.S. Bureau of Land Management is scheduled this month to dispose of the Federal Helium System, which will cause severe delays in the delivery of helium located in BLM stores. As a result, the helium supply in the U.S. barely outpaces demand, which has caused higher prices and longer lead times. As shown above in Figure 1, without Russia sources, TECHCET predicts a shortage in helium of approximately 1.5 Billion cubic feet (BCF) by 2026.

China presents its own complications. Due to tariffs on Chinese exports, the ongoing effects of the pandemic on global commerce, and sporadic price spiking, the flow of materials such as chemicals and metals from China has become irregular. In the past, Chinese material companies have unexpectedly lowered their prices in order to gain market share, while increasing prices for raw/starting material as illustrated with phosphate used for phosphoric acid in Figure 2 below. This practice, sometimes characterized as dumping, often damages the profitability and viability of competitor companies, causing chipmakers to be more dependent on materials from the Chinese market. Today, China is a leading supplier of raw materials needed for chip manufacturing. 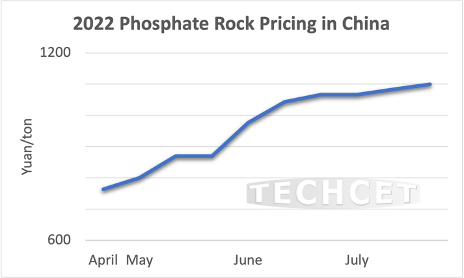 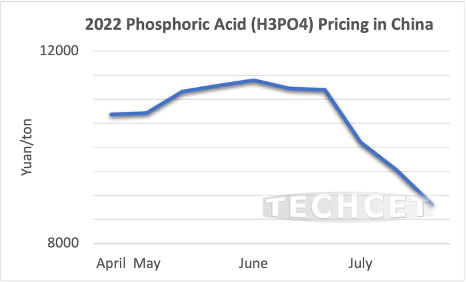 Asia also dominates the market for Ultra-High Purity (UHP) wet chemicals that are used to oxidize the silicon in semiconductor chips. Currently, all of the UHP purity sulfuric acid in the United States is imported from Asia– and many of the material supply chains in Asia are dependent upon raw materials from China. For all semiconductor grade wet chemicals, TECHCET estimates that there needs to be a 37-49% increase in supply over the next four years to meet projected needs for U.S. chip expansions. Without adding capacity to produce ultra-high purity chemicals, the U.S. will have to import 97% or more of the ultra-high purity chemicals needed for chip fabricators.

All of these challenges converge on a single point: the need for more local and dispersed production of these vital components of semiconductor production. When unexpected problems hit – such as war, pandemics, and trade complications – supply chains strain and cannot successfully keep up with required demand. This is especially problematic given that chip demand is only expected to keep growing in 2024-2025 and beyond.

Fortunately, there is an alternative to our reliance on problematic foreign sources. It starts with increasing materials production expansion efforts in the U.S., which must draw on support from the CHIPS and Science Act. By taking the right steps today, we can ensure that our domestic semiconductor industry continues to power innovation and economic growth for decades to come.

Lita Shon-Roy is President/CEO of TECHCET CA LLC, an advisory services firm expert in market analysis and business development of electronic markets and supply-chains for the semiconductor, display, solar/PV, and LED industries. Bonnie Glick is the director of the Krach Institute for Tech Diplomacy at Purdue and former Chief Operating Officer and Deputy Administrator of the United States Agency for International Development.